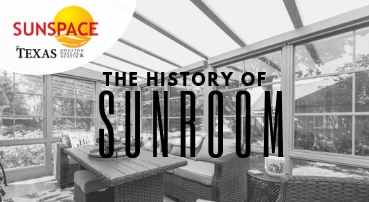 Do you ever wonder where the first sunroom came from, or how they’ve evolved over time? While sunrooms might give your home an airy, contemporary appearance now, they actually have roots going back thousands of years and spanning all around the globe. Here’s the full history of sunrooms, as well as all the predecessors that paved the way for the sunroom in your Texas home now.

Some of the logic that eventually informed sunrooms began in China around 6,000 BC. At that time, Chinese architects began building homes to face south so that the sun would heat the interior of the home, a practice that continues even today. Eventually, whole cities were constructed so that buildings faced south. While windows were likely no more than a gap in the wall at the time, you can still imagine families gathering around to soak up the light and heat. Finally, the trend of solar heated homes began to catch on in Greece and even Rome.

In 14 AD, Emperor Tiberius of Rome fell sick and was prescribed Armenian cucumbers. The problem is that Armenian cucumbers are seasonal, so the Romans created a clever solution: an indoor area that would allow them to grow produce out of season. This building had a translucent roof that allowed sunlight and fires lit outside the walls to keep the room warm.

While the ancient Chinese, Koreans, and Japanese people were known to use paper lining for windows, it was the Romans who invented the first glass windows, sometime around 100 AD. These windows were developed in Roman occupied Egypt, specifically in Alexandria. Rome had already begun to use the sun to heat buildings and bathhouses, and with this invention, they were able to trap solar heat within the room, while still enjoying all the light and views from their windows.

In the year 1201, “botanical gardens” were built in Italy, resembling something akin to the kind of greenhouses that we know and love today. By the 1450s, these greenhouses had caught on to Korea, who used semi-translucent windows to light and warm the plants that grew there. Also in the 13th century,

In 1664, John Evelyn invented “conservatories” with glass roofs in order to grow plants that thrived best in winter, similar to “orangeries” that Italy had developed in the 1540s. It was also in the late 17th century that glass windows became commonplace in English homes.

In the 1960s, in the wake of World War II, single family homes became more of the norm. Construction companies began to advertise porch enclosures, allowing families to enjoy their porch even in adverse weather like rain or snow. They were an instant hit, and manufacturers worked quickly to improve on and perfect the design.

Sunspace Modular opened, drawing sunroom designs by hand. Over time, we’ve branched out with locations in Texas as well as throughout the country. We’ve developed our stylish sunroom models, as well as porch enclosure models. Some of these rooms are designed to be enjoyed year round, and are more than just stylish. They also help to lower your energy bills for a more efficient sunspace than ever.

Sunrooms have come a long way, and they’ve truly moved into the 21st century now. Contact Sunspace Texas today for a free estimate on a sunroom of your own.

← Sunspace Texas and the St. Jude Dream Home ShowplaceWhy You Need a Sunroom →
Scroll To Top